A tweet about an Antonov heavy lift aircraft at LAX reminded me that one such beast had landed in Mojave when I was working there.

I set off to find pictures of the event in my old files, but we’re talking about early 2000s here, and I came up empty. It’s very possible I didn’t have a camera with me the day they let us look around the inside of the beast. It’s also possible there was a photographic record but it’s gone. I can’t find a single photo that predates 2003!

I did find a cool pic that proves I’m not crazy for remembering this event on JetPhotos. A couple more here.

What I did find in my old picture files was a small collection of pics I had taken from my cubicle window while employed at XCOR Aerospace.

An Office With a View

Mojave is not an ordinary airport, it’s a very active civilian flight test center. Countless unique experimental aircraft have flown and continue to push the limits at the desert outpost. And if they’re not unique and experimental, they are often in the upper atmosphere of coolness.

We had moved into the building on the flight-line during my time at the company. Prior to that, we were working out of an old shop with a trailer attached in the middle of blowing tumbleweeds, far from the runway. The move to the flight-line was like moving to the big leagues. Scaled Composites used the building to our right, and BAE Systems’ QF-4 Drones operation the one to our left.

That is why Having a window on the flight-line was a treat. My office chair was a front-row seat to some fine aviation geekery.

I got this idea for a project to take a picture of every cool thing that taxied past or parked in front of my window. And I was going to tape it all up into some sort of mosaic of flying coolness.

Sadly back then I had to borrow the office’s digital camera every time I wanted to take a picture, so my output wasn’t a match for what would happen today with a smartphone camera in my pocket.

Still, I got a few, and for the project to live on I post them here.

Here’s some random helicopter cruising by. Nothing special, but I just wanted to set the scene. You’ll notice the window is old. Well, our building was very old, possibly dating back to WWII. When I said we had graduated to the big leagues, I should have said we were the scrappiest team in the big leagues. 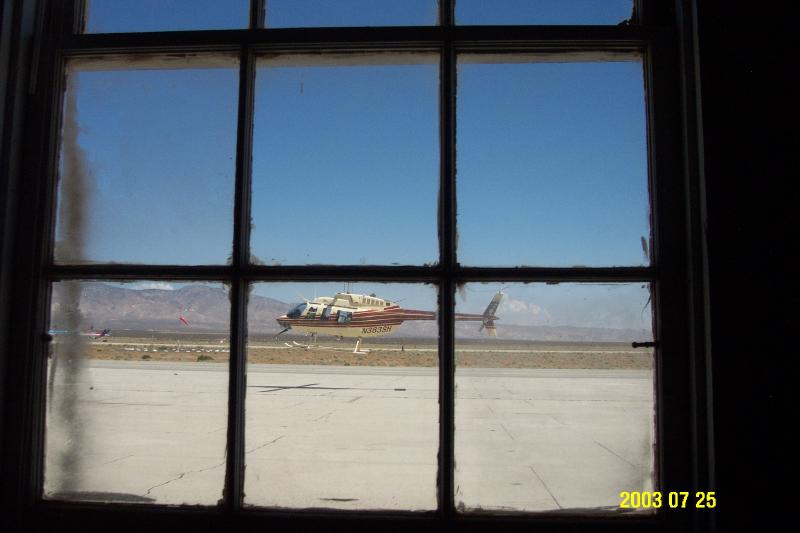 Next up, another mundane aircraft. There was a US Airways 737 parked outside my window for a while. Nothing special, but it was fun having a largish aircraft filling my view. 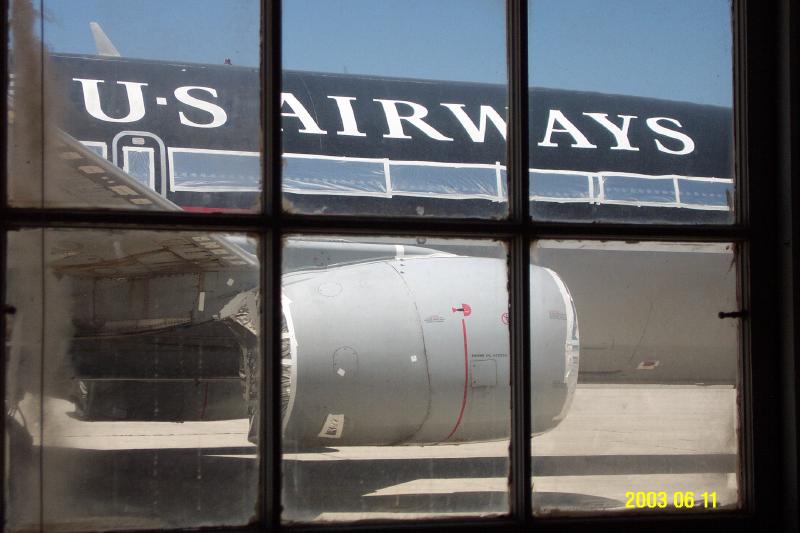 Speaking of airliners, there was a DC-10 too at one point. I remember when it arrived. It taxied and parked right in front of me one evening while I was working late. After it shut down I stepped out onto the ramp and walked around it, taking in its giant size. At one point a large forklift showed up and raised a pallet up to the door behind the cockpit. I guess there was no movable stairs handy, so that’s how they got the pilots down. The two clean-cut uniformed dudes took a hesitant but brave step from the aircraft onto the pallet and the forklift let them down slowly. Welcome to Mojave boys. 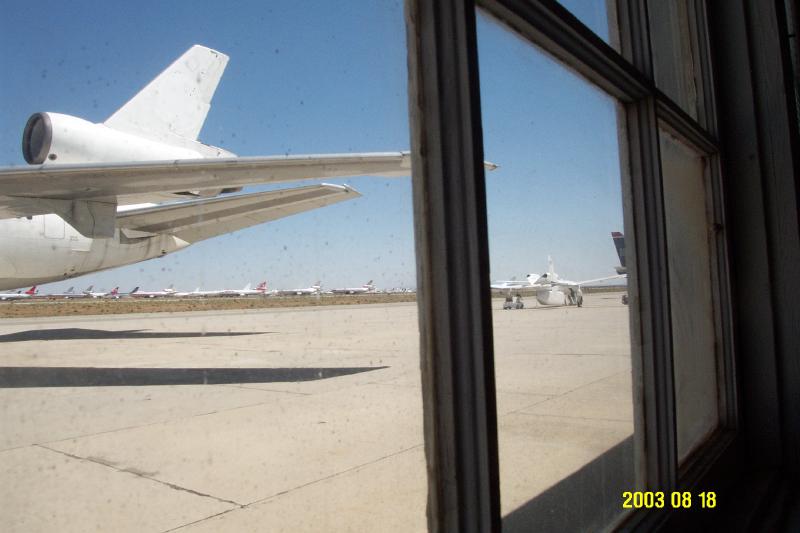 In the image above, beyond the tail of the DC-10, you can spot Scaled’s Proteus hanging out outside its nest, probably undergoing checks before a test flight.

As far as unique aircraft go, this one fits the bill. Only one built, fully experimental, and it’s still in service 22 years later, flying experimental payloads for any customer with good money. 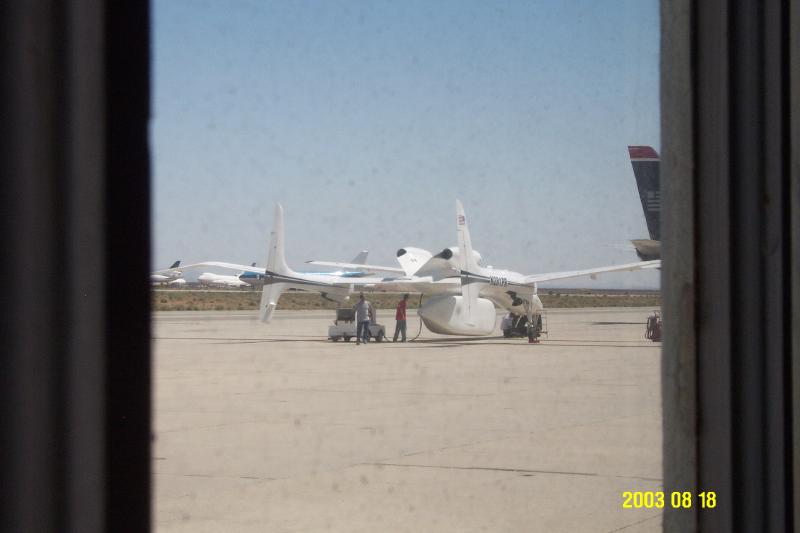 I remember when it was built and rolled out. I was working inside of Scaled’s facilities as an employee from a different project that I’ll certainly blog about at some point.

Anyways, I remember the Scaled crew were nice enough to invite me to the rollout, and I probably took pictures back then (1998!) But do I have them? No, no I don’t. 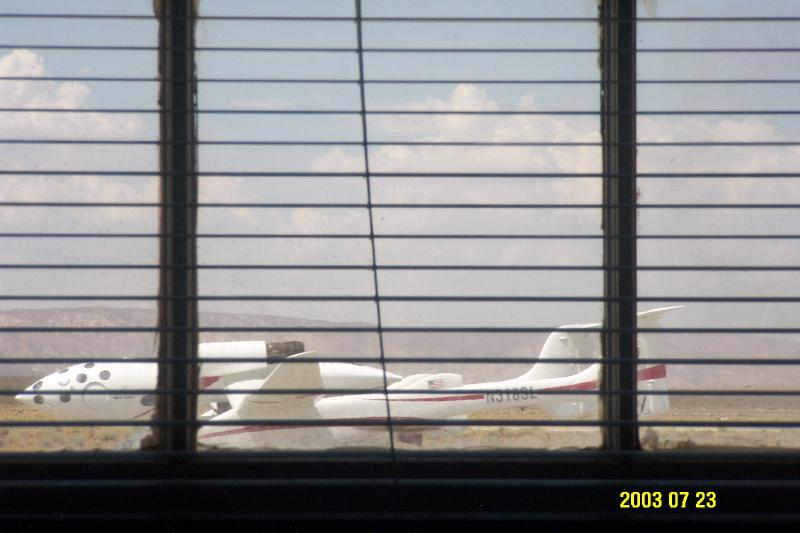 Speaking of Scaled, here is White Knight, and if you look closely that’s its buddy SpaceShipOne tucked underneath.

It’s a pretty lousy photo I know, but the point is that it was shot from my office chair, and what’s lousy about that? These days I see SS1 when I visit the National Air and Space Museum in Washington DC.

I admit I’m kind of amazed, 17 years later, that I didn’t bother to raise the blinds for this one. Really? Maybe the explanation is we saw Scaled’s aircraft go past our windows so many times we didn’t exactly jump out of our chairs when they did.

Judging by the timestamp on the photo, this is early in captive-carry part of the WK+SS1 flight test program. Meaning the SpaceShip had not been dropped yet.

That might have been Pete Siebold flying that day. He was a regular WK pilot early in the program. Much later, he would survive a terrifying accident. He was among the nicer Scaled folks. Always pleasant to talk to, even with us scrappy underdogs.

RIP Mike A, who did not survive, and was a good guy too. 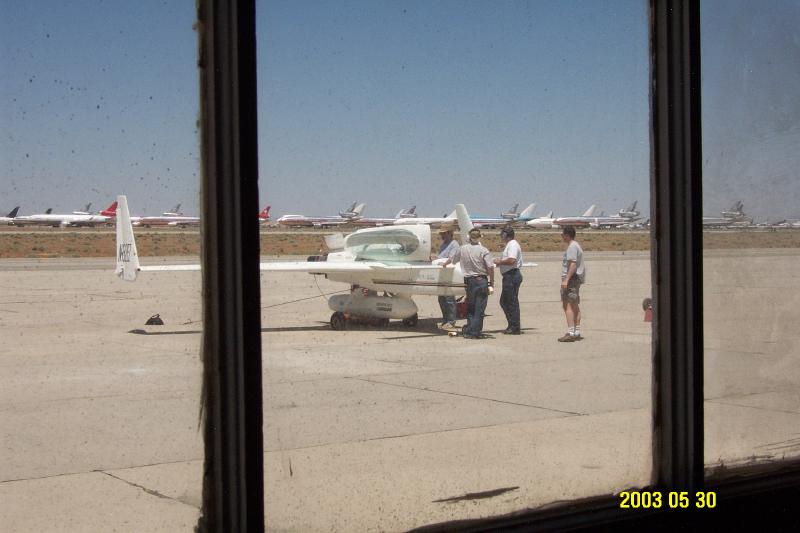 And finally, here’s our crew working on the EZ-Rocket. We never flew the EZ while I was employed at XCOR. They flew it before (I still remember where I was sitting when the whole town first heard that thing fly down the runway), and they flew it and other rocket powered aircraft after I left.

But just my luck, or lack of luck, somewhat characteristically of my time on various projects at Mojave, nothing great happened while I was there.

What I Have Missed

That’s a pretty weak set of photos compared to all the things I clearly remember seeing.

First, the obvious one: where are my F4s at? With BAE next door converting the venerable machines to target drones, there was no shortage of Phantoms going past my window. But I can’t find a picture of that right now.

Then there were all the times I could not have captured the moment because it was fleeting. My friend Mike did better than me, as with this F-117 doing a few flybys for example.

Mike also captured that time a vintage Douglas A-1 Skyraider came in for a pit stop. OK, it wasn’t exactly outside my window, I did have to walk a 100 yards or so but it was grand. Here’s a pic of me (at left) taking it all in.

This was day 9 of the #100DaysToOffload challenge.