I was watching news coverage before SpaceX’s launch of NASA astronauts Bob Behnken and Doug Hurley when I noticed something that took me back to the very end of my aerospace career.

Astronauts usually live in Texas near NASA’s JSC, and fly to KSC (or Russia) when it’s time to launch. During the Shuttle era they would fly in T-38s from Texas. For this trip they took one of NASA’s Gulfstreams, though it’s unclear why. Perhaps it’s because of the pandemic, or maybe it’s because the Crew Dragon interior has been compared to that of a business jet, and you might as well fly in on something that feels like your spacecraft.

The thing that jumped out at me about Bob and Doug’s ride was the hard-point under the middle of the wing. Boy did that look familiar.

Hardpoint under the wing in the blue circle. Photo by Emre Kelly, from this article.

Back in the mid-2000s I quit my job at XCOR Aerospace in Mojave, CA and moved to Los Angeles where I worked at an aircraft engineering firm. Our specialty was aircraft modifications. We did the engineering work and supporting documentation for certifying modifications of aircraft.

Our work ranged from simple mods: some rich private jet owner is upgrading the navigation avionics of their jet, so we would do the engineering work to modify the aircraft with a better external GPS antenna.

Other work was more demanding. We would usually be sub-sub-contractors on these, but they involved some rather drastic modifications of large aircraft for testing purposes. We helped modify a 737 into a F-35 avionics testbed, an A-3 into a radar testbed, etc…

Pin the Pod on the Gulfstream

One project involved hanging a pod underneath a Gulfstream G-III for NASA. For simple modifications a drive to the airport and a quick look at the aircraft armed with a digital camera, a ruler, and a drill was all we we needed to sort out a small antenna installation. (Yes, a drill. Sometimes you can’t know the skin thickness where you want your antenna installed, so the only solution is to drill a hole in the airframe where the antenna is going to be, and then do the engineering to fix it all up.)

But hanging a big pod under a the middle of the wing, which happens to be where the main fuel tank is takes a bit more work. Someone had to spend a large amount of time reclined in a low chair underneath the wing of that plane with a ruler and a notebook. That person measured and counted every line of rivets, and then re-measured again just to be sure. That person was me.

It sounds like hell but I loved it. Proximity to aircraft was my favorite perk of being an aerospace engineer. So I indulged in the task, and probably measured a third time just because it was better than being in the office. I also crawled all over the tail cone to prepare for the installation of a ventral tail fin to compensate for the lost stability of the hanging pod.

After all the wing measurements were done I sat at my workstation and cranked out an engineering model of the center of the wing. It was tedious work that had to be done as accurately as possible. We used the measurements of what was visible in the aircraft and cross-referenced engineering drawings to ensure that the model we were building represented as much as possible the details of the aircraft we were modifying. No drilling holes willy-nilly through the fuel tank!

After building the model we’d measure stresses in the structure under virtual loads for a standard configuration, and then measure forces with the pod hanging. The difference would tell us how much reinforcements were needed, and where.

Suffice it to say that aircraft was my professional obsession for a few months. It’s also the last aerospace engineering project I ever worked on and I wouldn’t see it to the end. I quit that Spring and started my own software biz. 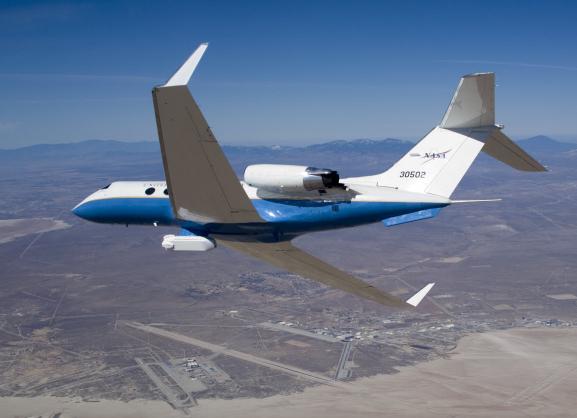 NASA-Dryden’s G-III after the mod, with pod hanging and that big angular fin under the tail. NASA Photo.

When I saw the hard-point under the G-III at KSC while Bob and Doug were giving their interview I thought for a while that it might be the one that I had worked on. How many G-IIIs could there be with a center hard point? It turns out there are at least two. I found out that JSC also has a G-III and it too was modified to carry a similar pod under its wing a few years after the mod I worked on. 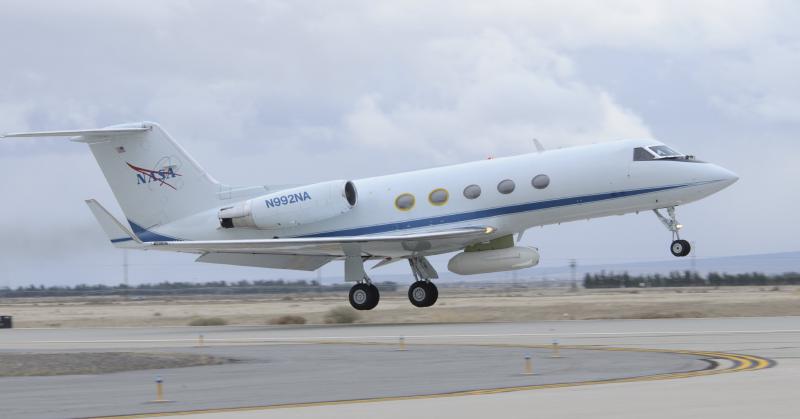 JSC’s G-III with pod hanging. NASA photo from this page.

Apart from ferrying astronauts, this plane serves in NASA’s airborne science program. It’s similar to the Earth-observing stuff they do from space, but they do it from within the atmosphere.

The pod is made by JPL and is called UAVSAR. It consists of a synthetic aperture radar that can make a very detailed map of the ground below. A complete explanation is here. A big part of the instrument’s mission is to overfly natural disaster areas to learn as much as possible about the event.

When carried above a disaster area by one of NASA’s modified G-IIIs, the UAVSAR pod has helped better understand earthquakes, landslides, volcanos, hurricane damage, and oil spills among others. Here’s a video showing the NASA team doing the survey of the gulf oil spill.

Bob and Doug are floating in the SpaceX Crew Dragon as I write this, but the ride they took to get to the rocket shows a lesser-known but still cool and definitely important part of NASA’s mission. And I was glad to have been a tiny part of it.