Deno is NodeJS reinvented. I like writing code for Deno, and I depend on it as a sandbox for Dropserver after trying many other approaches.

Unfortunately the JavaScript community at large does not seem to be embracing Deno as much as I am. It seems many people are simply sticking with Node for now even though Deno 1.0 has been out since Spring 2020.

I posted this on Mastodon last February: Deno’s mindshare in 2021 was in the single-digits and had only improved by one percentage point a year later. Yikes! Not a good place to be. 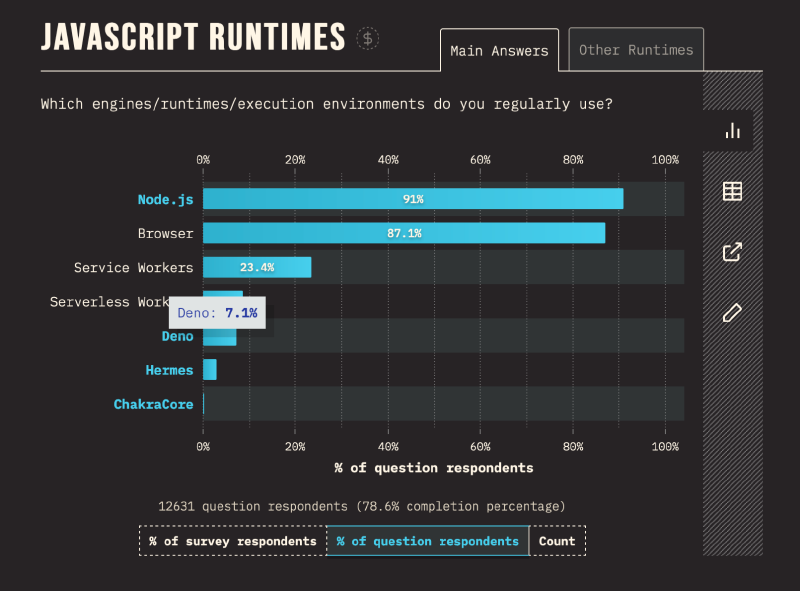 Why would people not make the switch? I think there are two reasons:

Most legacy code does not run on Deno. Deno is taking a clean sheet approach, and shunning the old Node Package Manager. It’s also all in on ESM modules, while most Node code is CommonJS. So the legacy code is (was) largely incompatible. For developers who are used to finding just about anything on NPM, looking for packages on deno.land/x/ must be a disappointment. For developers of large projects, such as Vite’s Evan You, doing the work to support Deno was simply unthinkable.

Furthermore, while Deno is an improvement over Node, it’s not revolutionary. I remember hearing Ryan Dahl (Node and Deno creator) talking about the early days of Node. He said people would just show up and write packages as they needed them, which quickly filled the void. However this time it’s different. When Node came out, it really stood out. There was nothing like it. Developer experience on most other platforms of the time was poor. So naturally developers did what developers do: they went to town and built it all.

Today there are plenty of fantastic platforms and Deno is not a sufficiently revolutionary step for developers to drop everything and write the libraries that are needed. It’s easier to just stick with Node.

What is Deno doing about it?

The Deno core team seem to have realized that the ecosystem is growing slowly and that the easiest way around that is to make it possible to use NPM dependencies in Deno projects. They’ve taken a multi-pronged approach to the problem: from transforming library CDNs to a compatibility mode in Deno itself. It’s a little messy but at least it’s now possible to use many of the code that assumes Node is the runtime.

Today I see reason for hope

I keep seeing hints that Deno is being embraced by the JS community. I don’t know if what I’m seeing now is the result of the NPM compatibility effort or if there is something else. It could just be that a good project that hangs around long enough eventually gets some uptake.

None of these are significant events, but to me they show a trend that will only build in the future. They make me optimistic. Will the 2022 JS survey show an uptick of Deno developers? Time will tell, but I expect it will. I think Deno is turning the corner.